Proud of these Sociology Activists! 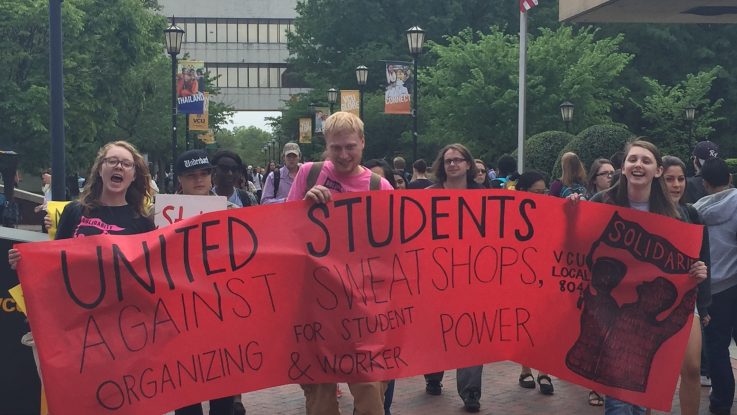 Student activists from the VCU chapter of United Students Against Sweatshops marched to the doorstep of the office of VCU President Michael Rao to deliver a letter of intent on April 21.

Students from the USAS chapter at VCU have attempted to gain support from administrators to affiliate with the Worker Rights Consortium, an independent factory monitoring organization that investigates garment factories producing collegiate apparel. Sonia Lutostanski, a junior sociology major and member of USAS, said VCU’s administration has been slow to show support for the organization’s goals.

“I think some of them have (been cooperative), but most of them are not necessarily shutting us down, but stalling us as much as possible,” Lutostanski said.

As an official form of communication and protest, students delivered their demands in writing to the president’s office.

“We really just want support from (Rao) honestly, and to go ahead and give the OK to affiliate with the Worker Rights Consortium,” said president of the chapter, Erin Tucker. “I’m not sure that it will happen. I think what will happen is that we will have some more discussions.”

Prior to last week’s march, USAS affiliates participated in Fashion Revolution Day in the Commons Plaza. The worldwide event was designed to bring awareness to VCU students and educate them to make more ethical shopping decisions.

Tucker said the USAS event was meant to show students that it is possible to make a difference simply by considering where their college apparel was manufactured.

“This has really allowed me to feel like I can make a difference. I can do something. I can impact the world and even though it may feel small, it’s really big,” Tucker said.

One main goal of the group is to bring more Alta Gracia apparel to campus. Alta Gracia, a former sweatshop, is now a fair trade clothing company. According to Tucker, most students are not aware that VCU’s campus stores carry this fairtrade brand and the cost for Alta Gracia apparel is the same or cheaper than other brands carried by the university.

“It’s so heartbreaking to see these stories like Rana Plaza,” Lutostanski said. “So if we could just … make even a very small impact on people it would be awesome to know that.”